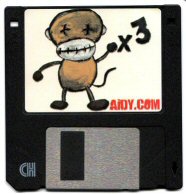 Recently, at the Aidy.com headquarters in Cambridge, a lively debate broke out over whether or not the 3.5” floppy disk was truly dead as a data storage format. Over the last few years it’s definitely taken a beating, starting with the first Apple Macs to be released without a floppy drive. Dell followed suit, then one by one the major high street names such as PC World and Staples stopped selling the ‘once revolutionary’ format.

With a total storage capacity of 1.44Mb its hard to see how such a medium could find a place in today’s world of memory sticks, DVDs, CDs and external hard drives. Yet none of these formats seem to have the charm and aesthetic appeal of the traditional floppy disk. We watched over the years as this format changed in size both physically, and in capacity until it blossomed into the 3.5” disk that we grew to know and love. It seemed there was nothing that could beat that feeling of cracking open a brand new box of Maxell’s and lovingly labelling each and every one with the labels that had been thoughtfully provided. So what happens now? Do we let this monumental medium fade into technological obscurity? No! We here at Aidy.com are not prepared to see the 3.5” floppy go silently into the night. We feel we’ve found a way to breathe new life into the flagging format and today we’ll be releasing ‘3 Monkeys’ as a limited edition single on this very format! By getting the MP3 bit-rate right down we’ve managed to fit the entire song on one disk. Only 100 are to be produced but we really do feel like we’re starting a revolution and can see many other bands and artists following in our footsteps. In fact we whole-heartedly encourage other bands to do the same!