After playing in various bands around Essex I made the decision to go solo in 2003, and self-released my debut album The Pilot Episode. The album was described by Steve Lamacq (Radio 1 DJ) as having a "cinematic quality that pervades the haunting weirdness" and went on to have moderate success with the track 'Fifteen Grand' being used in the movie Bad Trip starring Coolio and the lyrics to 'They're Coming' being published in the poetry book 'Something to talk about'.

After moving to Cambridge a few years later I kept a fairly low key existence, playing occasional gigs and releasing material for free via this site and steadily growing a loyal online fan base.

Fast forward to 2010 and to the birth of the Jonathan Coulton influenced ‘Song A Week’ project, for which recorded and released one new song every week for an entire year. The tracks were released every Friday as free downloads right here at Aidy.com and the growing interest has even resulted in some radio play and a number of festival appearances in the UK including Green Man, Fordham and Trystonbury. After playing my songs as a kind of revolving door band for nearly a decade I've met two musicians by the name of Paul and David who didn't seem to get the whole "revolving door" and actually stuck with me. Then after getting back from our first ever tour we decided we sounded a lot better as a band so we renamed ourselves the British IBM and began work on an album together. You can follow our adventures at: http://www.theBritishIBM.com

If you want to know what I look like then cast your eyes downwards onto the amazing black and white picture of me on stage at The Bull & Gate, London. I'm playing my modified Fender Jagstang, which is possibly the greatest guitar in the world. 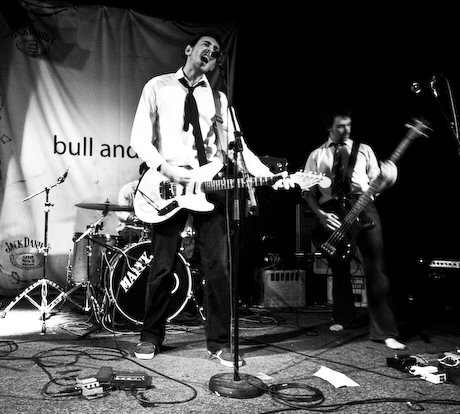