Between gigging, moving and attempting to fix up an old arcade machine which I purchased off Ebay I've also begun working on my next album 'The British IBM' which I'm planning to have ready for sometime in 2012. After the Song A Week project I'm keen to try something a bit different and less constrained time-wise so I'll be taking on a more traditional way of working and spending a reasonable amount of time crafting a set of songs, recording them as demos in my home studio before eventually taking them into a professional studio for completion. I'm intending for this to be my "master piece" if that doesn't sound too over the top. I'll be taking everything I've learnt over the years and using it to the best of my abilities to create something that I'm completely happy with and can look back on with some degree of pride.

This isn't going to be a free download or a collection of demo's. I'm going for a full polished album with crafted songs, all live musicians, produced and mixed by someone who knows what they're doing and can hopefully add to the whole process. Several songs have already been written and recorded in their most basic form i.e. just me and an acoustic guitar.

From the beginning to the end of this project I'll be emailing out the demo's at various stages of recording on the mailing list for people to check out. This means you’ll get to hear the full evolution of the material going from rough demo's to polished studio recordings so if you think that's something you might be interested in then take a moment to sign up at http://aidy.fanbridge.com.

I'm really excited about this whole project and I hope some of you'll tag along for the ride and maybe even provide feedback along the way. In the meantime you can have a listen to the acoustic demo of 'God's Front Porch' which should make it's way to the final album. We've very recently started to incorporate this song into the live set so if you caught any of our tour dates you may have heard it:

Well we're all back in one piece, we're all still on speaking terms after spending a week in each other pockets and we've really enjoyed the whole experience! Thanks to everyone who came to see us, it was a steep learning curve but we've pretty much got to grips with the whole touring thing and we're very keen to get back out there play outside of our hometown on a more regular basis. We've already got a gig booked for The Jolly Brewer in Linoln on the 10th September 2011 and if anyone else out there wants to book us just drop me an email at:
This email address is being protected from spambots. You need JavaScript enabled to view it. 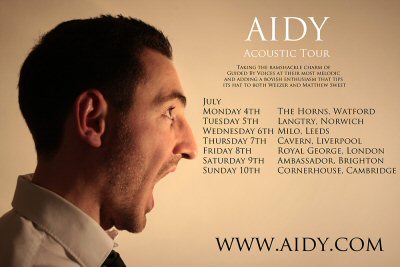 Last time I updated the site I was in the early stages of organising this, but just this morning I received confirmation of the final date! So we now have a full ‘week long’ UK tour booked up, which is kicking off in Watford on the 4th July. We’re all really looking forward to gigging outside of our home town and hope to see some of you along the way and if any of you have any requests for songs you’d like to hear live then drop me an email, FB or Twitter. Check out the full list of tour dates below.

I’ll be playing an opening set at The Portland Arms, Cambridge on Saturday 12th March 2011, for a charity gig organised by fellow Cambridge musician Sam Robson in support of the Epilepsy Society. It's an extremely worthy cause as one in every 131 people in the UK suffers from this serious neurological condition including Sam himself. He said “The Epilepsy Society is a charity very close to my heart as I was diagnosed with the condition in my early teens. I’m lucky - thanks to my medication my seizures are controlled allowing me to live my life the way I want. Many people are not so lucky and I wanted to do something to raise awareness for the fantastic work carried out by the Epilepsy Society.”

As well as organising the gig Sam is also going to be running the London Marathon on April 17th followed by running back to his home town of St Ives, totalling just over 100 miles, hence the name of the gig! It’s looking to be a great line-up headlined by Isaac’s Aircraft whose debut single recently made it into the Top 30 Indie Singles chart on Radio 1. The full details are below, and if you'd like to sponsor Sam in his marathon efforts then please go to www.justgiving.com/Sam-Robson

The Titanics - Mighty funk and soul from the Midlands
www.facebook.com/TheTitanics

Trying to make it in this world you do have to be tough, especially if you’re an artist trying to make it. There are so many others out there vying for everybody’s attention that you do have to be tough to accept anonymity but also resourceful and creative to separate yourself and make your voice heard. If you’re neither tough nor creative, then you end up a grumpy old man who gets angry every time he listens to the radio.

Singer songwriter Aidy had a busy 2010. After moving to Cambridge and releasing a few albums that remained frustratingly under the radar, he decided to do something different.

"I set myself the challenge last year of writing, recording and releasing one new song every week for the entirety of 2010."

That’s a New Years’ Resolution I haven’t heard before. Unlike most people, Aidy stuck to it, which resulted in 53 new songs added to his repertoire, a record deal with Expat Records and a couple of festival appearances, including Green Man Festival."